People always ask me how I stay motivated to go to the gym everyday but the truth is it requires no motivation at all. It has turned into a habit. When I first started exercising I went to the gym to miss the rush hour traffic. Even when I didn’t want to go I would still go because it wasn’t worth sitting in the traffic. After a few months I started to reap the rewards.

I stopped smoking, I felt healthier and I looked much better. At the beginning I was forced to go to the gym but after changing jobs and the traffic disappeared I continued with my new habit.

Habit creation is what we all need to work on when it comes to exercising and we should focus less on motivation. Motivation requires will power where as habit reforms require a change in conscious actions. When you start to become mindful of your actions they become easier to change.

A few months ago I read a book called The Power of Habit by Charles Duhigg which explores why habits exist and how they can be changed. Duhigg explores the concept of a habit loop which consists of a Cue – Routine – Reward cycle. 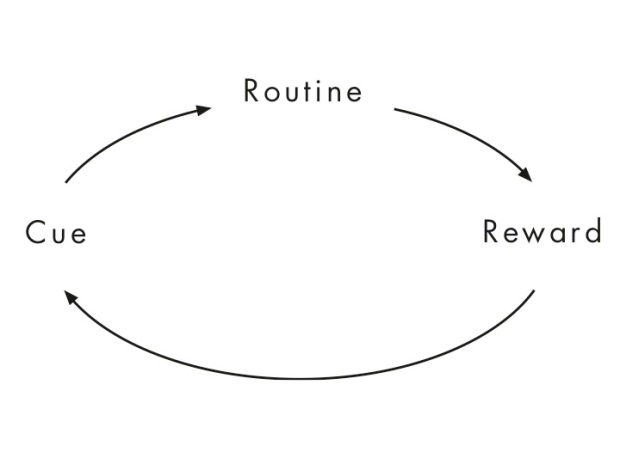 He studies various case studies from habits formed around diet and exercise to habit reforms in large cooperation. To understand how to change a habit we need to understand what the cue and reward is that is causing this habit to occur.

“Cues can be almost anything, from visual triggers such as a candy bar or a television commercial to a certain place, a time of day, an emotion, a sequence of thoughts, or the company of particular people. Routines can be incredibly complex or fantastically simple (some habits, such as those related to emotions are measured in milliseconds). Rewards can range from food or drugs that cause physical sensations, to emotional payoffs, such as the feelings of pride that accompany praise or self-congratulation.”

This short 3 minute video shows perfectly how if you can diagnose a habit you can change it. It shows how a man changes his 3pm cookie habit. Sound familiar!?

Show up. Every time you show up you are one step closer to making exercise a habit.

This is why showing up is the most important first step to creating new exercise habits. No matter what happens. Show up. If you are tired or hungry or you had a bad day or a bad sleep and even if you know it will be a shitty workout. Every time you show up you are one step closer to making exercise a habit. My friend Gabrielle says she will get into her yoga gear and lay on her mat for 10 minutes before she starts her exercise. This is the home workout equivalent of showing up. Once you show up you will no doubt get the work done and eventually it becomes a habit.